We were thrilled when lifestyle blogger Hero from MuddyStilettos.co.uk paid us a visit and this is what she said about us…

“Muddy says: arguably the best colourist in the county, the award-winning Anne Veck, French native turned UK snipper, has salons in Oxford and Bicester to tempt you.

My second visit to the Anne Veck salon and just as impressed this time round as the first.

There are two salons, one in Oxford, the second in Bicester, and they specialise fashion forward hairdressing with eco credentials (winners of Salon Business’ Best Green Salon Award 2017). The Oxford salon is just over the Magdalen Bridge on the ‘real’ side of the city, next to Cowley Road.

Anne is a colourist supremo – her own hair is an avant garde Toyah-esque mix of orange and red – and she totally looks the part. Plenty of gongs in the cupboard too – she won Style Master International Winner 2016 and Southern Hairdresser of the Year 2016, and she’s also the Revlon Professional Creative Brand Ambassador for the UK and Ireland. Pierre, my young French cut and colourist who turned my hair punky orange for a while (review to come shortly!) subsequently won the Tribu-te Paris Young Talent award, with style director Emmanuel Esteban won Afro and Anne Veck herself  overall winner across all categories.

Basically, the salon is really good!”

And we say “Three cheers to that”! Thank you very much you are a hero (sorry).

Here are our own three heros (pun intended again) with their big ones (cheer up Emmanuel you have a big one, its official) from left to right Anne Veck, Emmanuel Esteban, Pierre Ginsburg. 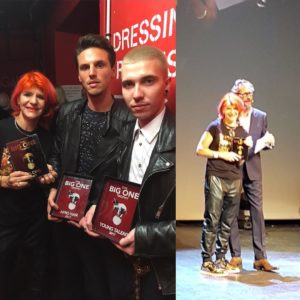 Scroll to top
We use cookies to ensure that we give you the best experience on our website. If you continue to use this site we will assume that you are happy with it.Ok