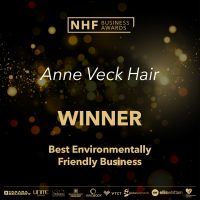 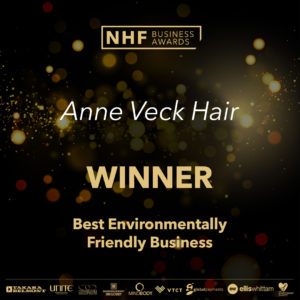 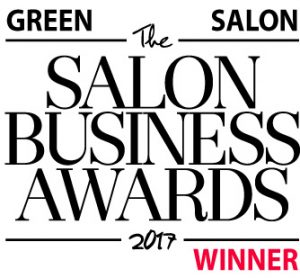 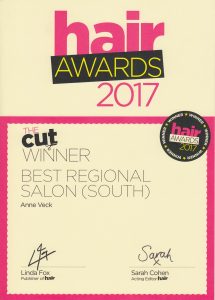 It has been announced that we beat finalists from across the country to win the Most Environmentally Friendly Business category. We collected the award at a glittering ceremony held at the VOX conference centre in Birmingham on Sunday 19 November 2017, which also celebrated the industry organisation’s 75th anniversary. .

NHF president Agnes Leonard commented: “Our winners have worked extremely hard to get to where they are today, so we wanted to use the Business Awards as an opportunity to recognise their success.

We refitted the salon to feature as many environmentally positive features as possible back in January 2013  and followed up by entering 3 categories in the British Hairdressing Business Awards that year and in 2014. We got to the finals but didn’t win, so owners Anne and Keith are now very happy to have received 3 hair industry accolades 4 years on! Making the salon more green and sustainable is an on-going process, with recent innovations including carbon neutral broadband and telephony as well as (very soon we hope) partnering with the world’s greenest printers for all our future stationery!

Scroll to top
We use cookies to ensure that we give you the best experience on our website. If you continue to use this site we will assume that you are happy with it.OkRead more